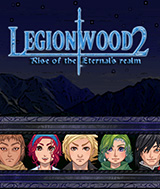 Legionwood 2: Rise of the Eternal's Realm

LEGIONWOOD 2: RISE OF THE ETERNAL'S REALM is an epic fantasy Role Playing Game in the style of the classics of yesteryear. Playing as an elite imperial soldier trying to protect their homeland, you'll get to explore a massive, fully detailed medieval empire filled with daring adventures, outlandish treasures and dramatic conflicts. Along the way, you'll have to contend with the likes of political corruption, zombie hordes, the onset of war and a game world that changes depending on your choices and actions. Get ready to pick a side on the stage of history. Will you be the one who saves Legionwood, or will you be the one who dooms it to an age of darkness?