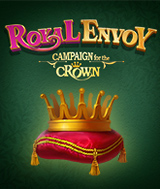 Royal Envoy™: Campaign for the Crown

Breaking news! The monarchy is at risk! Someone wearing a black cloak broke into the royal palace. The stranger was fearful and grim, and challenged the King's right to the throne. He accused the King of being unable to manage the kingdom, and demanded to be elected King himself! Help the King win the elections and defend the truth and justice in the kingdom.

DIAMONDLADY1 | 5
Pros: LUV TIME MANAGEMENT
Cons: CANNOT SEE THE SCORES PER ROUND LIKE PREV VERSIONS
Comments: i ABSOLUTELY LOVE TIME MANAGEMENT GAMES AND THIS SERIES IS ONE OF MY FAVS!! FUN YET YOU NEED TO STRATEGIZE A BIT ON SOME OF THE ROUNDS.