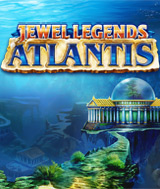 Atlantis--did it ever really exist? For millennia, adventurers have sought the sunken kingdom and its countless treasures--but who created the mystic city in the first place?

Discover the secret, erect magnificent buildings, and restore Atlantis to its former glory. Build rows of three or more of the same symbol; you will have huge chains built before you know it! Collect ancient artifacts and secret treasures that you can use to build your city.

redshoes10 | 3
Pros: just started playing so far so good
Cons:
Comments: so far I like it keeps you moving

mare | 4
Pros: Music -
Cons: Slow build process
Comments: I really got into this one. Match 3 with a background theme to rebuild Atlantis. the graphics are good and the music is better than most. The rebuild process is slow thoug since you only get one brick per level. There are 140 levels and i am only on 25 but it's fun. There are 3 ways to play , Adventure (Zen) which is not time limit, Tournament, and timed. Im playing Zen. Try it for a while - you'll probably get hooked.