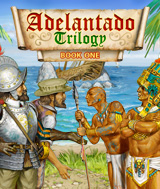 The storyline of Adelantado begins in Spain during the Age of Discovery. The Queen summons a brave and noble officer: Don Diego De Leon. She tells him about an expedition that was sent overseas to find gold for the crown. For a while, there was no news from the adventurers. The Queen grants Diego the title of Adelantado - a governor and caretaker of the new lands. He is given a mission to find and, if possible, save the lost expedition as well as collect the much-needed gold. One of the Queen's ministers, knowing of Adelantado's mission, wants all the fame and glory for himself. He hires a thug named Pablo Rodrigez to complete the mission first. And so begins your adventure…