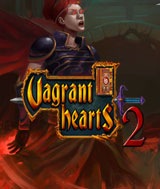 Following Valmore's defeat, Azulel has enjoyed an era of peace and quiet The Brotherhood's reputation has been restored and the Kingdom is properous. However, difficult times are quickly approcahing from a land not too far away...

Weeks after disappearing, Scarllet and Wyatt are found in Dark Azulel, a land forgotten by the government and made up of separated islands governed by no one. A mysterious and dangerous sect called Black Scepters are pursuing Scarllet for unknown purposes...could it be related to Scarllet's new found gift? Begin the second adventure to find out!

bFly2001 | 4
Pros:
Cons:
Comments: My son said this game reminds him of Zelda. It kept him busy for a nice amount of time at 13 that says alot. I never played for myself and that's all the information he gave me about the game.