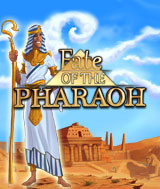 Fate of the Pharaoh

Constant attacks have exhausted the magnificent realm of Egypt. The days of glory are far behind now, wrapped in the dust of endless deserts. But, there's hope!

Take on the role of the brave young advisor and raise the golden cities of Egypt once again in this fun and beautiful strategy/management game.

Construct homes for your people, set up production, trade, pay tribute to the gods, fight crocodiles and dangerous cobras while building the monuments and famous wonders of the Egyptian realm. And in case that wasn’t enough of a challenge, you just might be visited by aliens from space that will teach you secrets of how to build the mighty pyramids.

THe Fate of the Pharoah is the trash heap

jp2009 | 1
Pros: none
Cons: everything
Comments: This game is just a cheap rip off of the build a lot series with terrible graphics. At least the Build A Lot series had interesting themes. I found myself getting bored after only the second level. I had to give this a one star rating because I couldn't rate it a minus.

bFly2001 | 4
Pros:
Cons:
Comments: This game reminds me of the Build -A- Lot series games. You have to complete daily task that are given to you to progress to the next level.