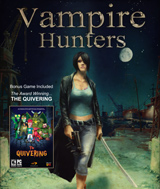 The city lies down to sleep while somewhere in the middle of an old dockyard a man's life fades away. The most skilled vampire hunter is dead. The night is damp and chilly as the investigation begins. The main character in this tale is an adventurer who has been living in the company of the undead for years. The story starts to unfold as a mysterious murder, apparently without a motive, takes place on one of the dockyard's piers. None of the Nosferatu clans claims responsibility for the attack and what are even worse, strange things start to happen...

mare | 1
Pros:
Cons: Maneuverability
Comments: Not my kind of game. Mouse, keyboard, 360 degree, No no not for me. I get dizzy just trying to get around. My eye hand coordination must be way off. Plus its dark and I can't see where i'm going. I'm sure the story is good and the younger folks are sure to be better at it than me but I just gave up.