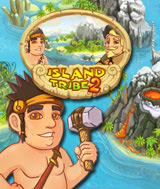 Get ready for new adventures in the second part of the Island Tribe series. Be one of the first to know what has happened to the settlers after their escape from the great volcano.

Having sailed for many days in search of a new home, the settlers came upon a lonely traveler who had become lost at sea. Thankful to the settlers for his rescue, the explorer decided to share a secret with them and unfolded an old map. It revealed three islands cloaked in mysterious fog that concealed hidden treasure and magic artifacts...

Help the tribe find a new home and make it through to the magic Altar of Wishes. Your way won't be an easy one, so get ready for real dangers and challenges. Keep collecting resources, constructing and repairing buildings and overcoming new obstacles in Island Tribe 2! Lead the tribe and make all their dreams come true!

jojo319 | 4
Pros:
Cons: Last level
Comments: I liked getting the supplies so that you can upgrade your buildings quickly to produce more materials to feed bears and put out fires. During the game you pick gems that you pay the pirate when he appears. This way he doesn't burn down your building. On the last level, you don't get any gems and the pirate keeps burning buildings and destroying bridges. It's challeninging but to a point that it takes the fun away. Overall I liked it and will play again. Wish you could see the whole screen from the start and not just exposing more of the screen as you progress thru the level.