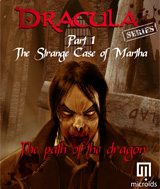 September 1920, the Vatican appoints Father Arno Moriani, the "Devil's Advocate", to investigate a potential candidate for sainthood in Transylvania: Martha Calugarul, who lived in the small town of Vladoviste. While staying at the village inn, Father Arno meets several interesting people : Ozana, the inn keeper; Janos Pekmester, a teacher at Alba Lula University; Maria Florescu, the doctor who has replaced Martha at the dispensary; and Stephan Luca, a journalist.

After hearing revelations about strange creatures called "vampires," Father Arno's mission changes: he is to investigate those monsters coming from the Romanian folklore to demystify them. The official position of the Catholic Church is clear: those pagan beliefs have to disappear. Father Arno contacts Irina Boczow, who is famous for her book collection and knowledge about vampires. Irina agrees to help Father Arno in his mission and invites him to come and visit her in Budapest.

angelbabe1980 | 1
Pros:
Cons:
Comments: I just couldnt get into this game was way to long and not enough action

Path of the Dragon

mare | 2
Pros: Thinking Game
Cons: Weird
Comments: I have no idea how to figure this out. I've been playing for over an hour and I've only accomplished one thing. I have been everywhere and see nothing to do. Maneuverability is a bit tough until you get used to the 360 effect. I kept going back to where i was before. It's dark and dreary. Can't say it was much fun.