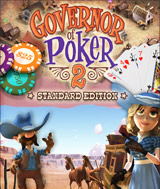 Are you ready for an exciting adventure in the Wild West? Governor of Poker 2 has arrived, complete with tons of extras, more cities to conquer and tournaments to play, and great new features, challenges and enemies. The game begins where the first one ended: A new government has come into power and outlawed the game of poker. As a result, you´ve lost the cherished title of Governor of Poker. Convince the chairman of the gambling committee that poker is good, clean fun, and show off your skills in this fast-dealing sequel.

SWEETCHEEKS7 | 5
Pros: THE LITTLE IMPROVEMENTS, SUCH AS BEING ABLE TO SEE YOUR HAND AFTER FOLDING
Cons: Took a while for me to get used to the new voices of the poker players
Comments: I like how this game is a continuation of the storyline of the first Governor of Poker. Getting to see what comes "next" is the best part of sequels! There are plenty of differances between the two games. Enough to keep me wanting to play on & on to see what else is gonna pop up! It's fresh in a familiar sort of way. 2 thumbs up!!

Rosalind | 1
Pros:
Cons:
Comments: not a fan of this on either. i just played it for the trophy.