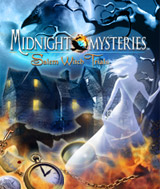 The famed writer Nathaniel Hawthorne has died during a freak snow storm, and his ghost has come to you, asking for help. There´s more to this case than first appears, and only you can help free his spirit. Why was it snowing in May? Could Hawthorne´s powerful friends and the Oval Office have something to do with the author´s untimely death? How do legends of witchcraft play into the death of a writer 170 years later?

Travel back and forth in time from the scene of the author´s demise to the 17th century, where a town is going mad with rumors of witchcraft and a woman is facing accusations and the gallows. Unravel the secrets of Salem´s accused witches and solve the mysterious death of Hawthorne in this Midnight Mystery.

Wish my English classes were more like this HOG!

BurlGirl | 5
Pros: puzzles give you PAUSE
Cons: got lost on the map at the end of the game
Comments: LOVED the storyline since I'm from New England and have visited Salem's House of Seven Gables. Tried to collect the extra clovers and clicked on all the Ravens along the way...excellent graphics and flow. Thoroughly enjoy the Midnight Mystery series. Maybe they'll work on Concord MA and the Minutemen next.