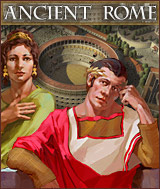 The greatest empire the world has ever known is in the palm of your hand! Expand the Roman Empire from a simple hamlet into the glorious expanse of power and dominion for which it is known today in Ancient Rome, a casual city building simulation for the history buff in everyone. Throughout 30 briskly paced levels, you´ll produce goods, construct buildings, attract workers and much more. Meet your goals and earn the approval of the emperor as you carve your name into the annals of time!

When I Built Ancient Rome

bFly2001 | 4
Pros:
Cons:
Comments: This is another game similar to the Build A Lot series games. An to me just as fun as the original, on each board your given a list of task that you must complete. If your not able to complete it then you'll have to replay the board. Also you have traders an new players in this version but any age can play this game.

SissyTintin | 4
Pros: Strategy, with a fun bonus Villa
Cons: no free play zone
Comments: This game is fast paced and is easy at first, but becomes more challenging quite quickly. It has a rewards system built in, which is a plus, but lacks a free play zone, which is too bad, as it would be fun if it had one. i am still in the early stages, so maybe i will get lucky and discover it unlocks a freeplay zone later on, i hope.