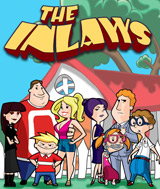 The InLaws is an adventure game that features two families, specifically two sisters and their husbands. The two couples are part of the more or less (mostly less) functional family that are waging a quiet but entertaining war. They are superficial, egotistical, unscrupulous and wicked; but above all, they are constantly competing with each other to prove who is best, and more importantly, who is the worse. The two couples strive to impress the rest of the family with their possessions, looks, parties, and anything else they can think of. If the others are made to look like fools, well, war is war.

Dobby01 | 2
Pros: comical
Cons: length
Comments: you play the part of Ed who messes with his nephews b-day party. This game is humorous just wish it was more than one episode apparently there are others. Need all episodes.

Dcychic | 1
Pros: graphics
Cons: can't use mouse really
Comments: Booooooooooooooooooooooooo I didn't like the game at all it would have more fun if it was on playstation or something