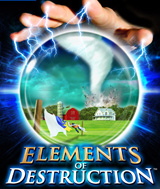 You are Dr. Edgar Herbert - forced into retirement, humiliated and embittered by a corporate scheme to gain control of your valuable weather controlling patents. Use your inventions to discharge tornadoes, lightning, earthquakes, and many other forces of nature to exact revenge on the scheming company - and the world.

Destroy tornado tunnels, Tesla towers and shock towers before all your energy is drained and the enemy satellites discover your location. Upgrade your element level, or search for the hidden superpowers such as a volcano, an elemental light beam, or a hurricane to cause maximum damage. Recharge your energy often to cause as much damage as possible without burning valuable time on the clock. Use a structure´s blast radius to your advantage for destroying multiple buildings in one attack.

Compete in two online and split screen multiplayer modes: ´Destruction´ - go head-to-head with other player to see who can cause the most damage, or ´Cooperative´ - work together with other players to destroy the corporate menace.