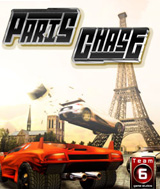 Team6 has developed almost all major cities in the world: From Amsterdam to New York, from London to Berlin. One major European city is still missing: Paris. Team6 certainly kept the best for last since Paris is becoming the latest, largest, and most detailed city of all. Not only all important landmarks, roads, and bridges are present in the game, but also loads of jumps, shortcuts, breakable objects are there to ensure high-standard gameplay.

Paris is the most interactive, atmospheric and free-roaming city Team6 ever built. Every neighborhood is unique, every street feels alive. In Paris Chase you start your career in a cheap garage, with affordable street-cars but you can work you way up to 5 other garages. Each garage has it´s own style and cars, so there are plenty of cars, areas, and characters for you to explore.