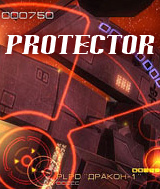 You´re alone in space, orbiting a planet where mankind is making a desperate stand against a malicious alien force. As enemies warp in at breakneck speeds, you fire your lasers and watch them disappear in a shower of fiery debris. Flaming meteorites appear next, burning a smoky trail toward the planet below. You swing your cannon around until the lights of a far-off city come into view and begin taking out the rocks, saving countless civilians from destruction. You take a breath and prepare for the next wave.

Protector is a 3D turret shooter set in space. Using your mouse, you must vaporize countless invaders using lasers, rockets, homing missiles, and more. The sheer variety of enemies and weapons is staggering. Protector also offers four difficulty levels geared toward both novice space jockeys and battle-hardened veterans. Other features include advanced graphics, pulse-pounding music, and explosive sound effects. Strap in today and prepare for the most intense battle of your life.

SHANTIA816 | 1
Pros:
Cons:
Comments: was not intersting at all, and it took me a hour and half to get credit for playing. when i was only was suppose to play for 30 mon

Sue420 | 2
Pros:
Cons:
Comments: confusing, and difficult, did not keep me interested in playing