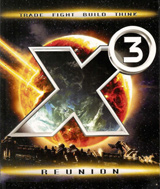 The Sequel to the award winning X²: The Threat, will introduce a new 3D engine as well as a new story, new ships, and a new gameplay to greatly increase the variety in the X-universe. The economy of X³: Reunion will be more complex than anything seen in the X-universe before. Factories are being built by NPCs, wars can affect the global economy, NPCs can trade freely and pirates will behave far more realistically.

What happened so far: While the Argon fleet is stretched almost to a breaking point by the continuing attacks from Khaak, a new enemy is stalking the X-universe. What links a mysterious ship with the power to disappear, the ruthless Yaki pirates, and a machine left by an ancient species? It´s time to strap yourself in, warm up your laser cannon and get some answers.

The Bala Gi EXPANSION is a campaign to unlock a unique new spacecraft and get hold of the biggest construction set in the X universe so far: The headquarters station... Jump in to the cockpit of the exclusive (and unique) M6 class battleship once owned by the Pontifex Maximus Paranidia himself. This ship is lean and mean and can host two M5 ships.

bFly2001 | 4
Pros: Every thing
Cons:
Comments: The continance is here after you made it home. Now you & your team reunite to embark on a new journey. Still the same great shoooting off the baddies but now they can come and try to take your ship. All ages approved.

Spiralnexus | 5
Pros: Insane graphics, trade,build, or fight
Cons: High system requirements, High learning curve
Comments: Before I begin, let me say this: do not attempt to play this game without a good computer made for 3d gaming. The system requirements are true, period. With the minimum system you will not enjoy this when you hit an asteroid field. I bought this game when it first came out and it is a beast. It will cripple a gaming computer if you set it up on high. But it is well worth it. The game is packed with system after system of different races and things to do. You can choose one of 3 paths. Trader, Fighter or Builder. The trader way is how you have to start to amass enough money to build your fleet. The ships are highly detailed and responsive. If you have a few different monitors you can run them all an map different cockpit views to different monitors. I have 4 and it is the coolest thing to look to your right and left to look out the window of your ship. It is a deep game and even if you do not get into the multimonitor setups it is always engaging and you will find that you lose track of time in the real world when you play. This is a quality game.