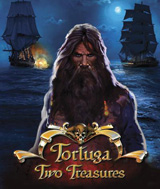 The action adventure Tortuga - Two Treasures has players setting sail as pirate captains in search of action, adventure and of course, treasure. The game tells the story of the young swashbuckler Thomas ´Hawk´ Blythe, a pirate in the employ of the sinister Blackbeard. After Hawk is captured and betrayed, a dramatic battle for power, romance, treasure, and truth commences beneath the Jolly Roger. Two Treasures features epic land and naval battles, featuring everything from sword fights to cannon-battles.