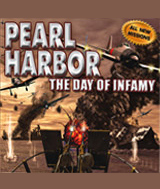 On the 7th of December 1941, the Japanese attacked the USA at Pearl Harbor without declaring war beforehand. The entire US war fleet suffered heavy losses during this sneak attack, which the Japanese called Tora Tora. 18 ships and 188 aircraft were destroyed and 2.403 Americans lost their lives. The Japanese strike force, themselves, only lost 29 aircraft and 200 military personnel.