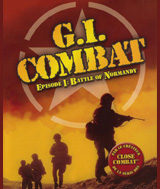 Normandy, June 1944 -- Immerse yourself in the struggle to hold back enemy offensives, control vital crossroads, or lead an elite squad to capture key strategic targets.

The clouds hovered over the horizon as soldiers crept onto the wet sands of Omaha beach. Weeks of torturous battle lay ahead of them - the chance to wage war for their country, battle for their futures, and strive for victory. Now it´s your turn to join the fight.

G.I. Combat is Real-Time Strategy at its best, transporting you through the Normandy campaign, testing your mind and your body every step of the way. Launch yourself into this dynamic 3D environment, grab hold of the most renowned weapons in history, including the MP-40 and the Thompson, and command some of World War II´s most powerful tanks and artillery such as the Jumbo Sherman, the Mark V Panther, and the dreaded German 88. Push back enemy offensives, lead assaults to capture key objectives, and charge into the lush terrain of Normandy in one of the mot historic battles ever fought.