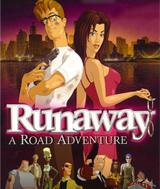 Brian, a student on the verge of graduating from college, is suddenly and mysteriously attacked by Mafia gangsters. During his desperate flight, in the company of a mysterious striptease dancer, he ends up meeting a wide range of unusual characters. But he has to figure out who´s trying to help him or kill him. The player will have to be very ingenious to figure it out who´s his friend or foe in this explosive mixture of murder, money, ambition, rituals, and deception...a whole lot of deception.